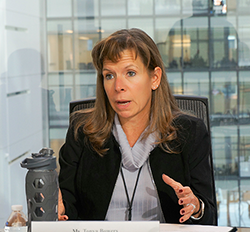 Tonya Bowers, Deputy Associate Administrator of the Bureau of Primary Health Care, told French health officials last month that the U.S. health center population has more than doubled to 28.4 million people since the administration of  President George W. Bush, and the number of health center locations has more than tripled  to some 12,000.

But despite strong bipartisan support for the program and an overall growth rate of 176 percent since 2001, health services in U.S. rural areas remain “fragile.” And demand for new health center clinics is overwhelming.

“We always get more applications than we can fund,” Bowers told Celine Jaeggy of the French embassy’s office of Labor, Health and Social Welfare, which requested the meeting with HRSA staff. Bowers noted that only one of about every six proposals for 500 new health center sites got agency financing in a recent grant competition.

The pent up demand, experts say, is an increasingly familiar phenomenon worldwide.

Kaiser Health News reports that high deductibles are contributing to the rural hospital closure crisis. Due to the high deductibles, patients avoid seeking primary care services that could solve minor problems before they devolve into major health issues with much higher costs. If patients can’t afford to cover deductibles, rural hospitals often don’t get paid, even as the larger urban hospitals where patients were transferred get close to full payment from the health plan. When a rural hospital doesn’t receive payment, they incur bad debt and leaves the provider in financial distress.

A new JAMA study reveals that one in three rural adults report issues affording medical bills. In the study, 32 percent of survey respondents had problems paying bills or dental treatment, including 19 percent of rural adults who reported major problems. Additionally, 44 percent of adults with lower incomes (less than $25,000 per year) said they struggled with medical bill affordability. “Our results are consistent with other research findings suggesting that the rural population has limited health care options, and US populations across the urban-suburban-rural continuum continue to experience issues with health care costs, access, and quality,” researchers wrote in the study.

On January 14, the House Energy & Commerce Committee held a hearing titled, “A Public Health Emergency: State Efforts to Curb the Opioid Crisis.” Although the hearing focused on the causes and consequences of the opioid crisis, several representatives and panelists present raised concerns about rising overdose deaths linked to methamphetamines. Rep. Diana DeGette’s press release states, “A bipartisan group of lawmakers – led by U.S. Rep. Diana DeGette (D-CO) – are raising concerns today about the increasing use of stimulants, such as cocaine and methamphetamine, among Americans in recent years.” Politico reports that according to preliminary CDC data, although drug overdose deaths appear to be down for the first time since 1990, meth-related deaths increased 21% between 2017 and 2018. Our team agrees that Congress should allow greater flexibility to spend federal dollars on broader drug treatment, not just opioids, and create more sustainable funding mechanisms for combatting the drug crises in rural areas, rather than relying on annual grants.

The plan — called “the Healthy Adult Opportunity” — would allowing states to opt out of part of the current federal funding program and instead seek a fixed payment each year in exchange for gaining unprecedented flexibility over the program. The Administration said the new program would allow states to offer patients more benefits while controlling government spending. States would not be required to switch to the new model. It will be optional, and states interested in it would have to seek authority from the federal government.

In 2010, PACHC was successful in advocating to the Department of Human Services (DHS) for Public Health Dental Hygiene Practitioners (PHDHPs) as providers eligible to generate an FQHC/RHC encounter, meaning that PHDHP visits are billed as T1015-U9 encounters.  Initially, DHS directed that PHDHPs not only did not need, but could not get a PROMISe number.  That direction changed with an August 2017 Medical Assistance Bulletin indicating that PHDHPs must be enrolled in the Medical Assistance (MA) program to provide services to MA beneficiaries.  To enroll in the MA PROMISe system and receive an MA ID number, an NPI number is also required.

A little-noticed change in a massive spending bill passed by Congress late last year broadens the scope of a $1.5 billion grant program previously restricted to the opioid crisis. Pressed by constituents and state officials alarmed by the growing number of people struggling with meth and cocaine, lawmakers of both parties and the Trump administration agreed to lifting the previous limitations on use of the funding.

The 340B Drug Pricing Program doesn’t create strong incentives for participating hospitals to use more expensive drugs, according to new research by the Medicare Payment Advisory Commission (MedPAC). MedPAC said hospitals that participate in the 340B program spend about $300 more on drugs for prostate and lung cancers, but not breast, colorectal or leukemia-lymphoma cancers, and that the higher spending at 340B hospitals seems to be driven by the type of cancer that people are treated for rather than 340B’s financial incentives.