The Office for Planning and Evaluation at HHS describes nine programs serving child welfare-involved parents with substance use issues, with a focus on their applicability to rural communities. These programs offered several types of services, including parent mentoring, case management, home visiting, and treatment for opioid use disorders.

The Office for Planning and Evaluation at the U.S. Department of Health & Human Services (HHS) describes nine programs serving child welfare-involved parents with substance use issues, with a particular focus on their applicability to rural communities. These programs offered various types of services, including parent mentoring, case management, home visiting, and treatment for opioid use disorders. Read more here.

Researchers at the North Carolina Rural Health Research and Policy Analysis Center examined 15 rural hospitals to estimate the change in use of inpatient services delivered by acquired rural hospitals following a merger. Read more about the findings here.

A House Ways & Means Democratic report on rural and medically underserved areas says stakeholders painted a bleak picture of the myriad problems facing those areas but they didn’t provide many overarching solutions — and that may mean that narrow, community-specific interventions are what’s needed, even if those models aren’t necessarily scalable.

The report, which analyzes feedback from stakeholders to the committee’s bipartisan rural health task force, says no federal policy alone will solve the issues. Instead, a sustained commitment from Congress, state, local and private-sector interests is necessary to develop sustainable, creative solutions to decades-long problems facing rural and underserved communities.

The committee in 2019 set up a rural health task force, chaired by Reps. Terri Sewell (D-AL), Danny Davis (D-IL), Jodey Arrington (R-TX) and Brad Wenstrup (R-OH), in a bid to better understand the challenges impeding health equity and to come up with best practices to tackle those issues. The committee received input from almost 200 stakeholders that highlighted challenges including: variable life expectancy across geographic areas; infrastructure issues like clean water and lack of broadband; lower rates of commercial insurance coverage in rural areas than urban areas; and health workforce and mental health shortages.

“Overall, RFI respondents presented a bleak picture of underserved communities that grapple with similar challenges ranging from population health and coverage barriers, to massive health system deficiencies, to structural environmental factors that adversely impact health. Respondents also emphasized the challenges in collecting data that appropriately quantify and highlight these differences in a meaningful way for researchers and policymakers to better understand — and ultimately propose interventions to address — these inequities,” the report says.

The task force and committee leadership have asked the Medicare Payment Advisory Commission to update its 2012 report on Medicare in rural areas, and to also look closer at dual eligibles and those with multiple chronic conditions in upcoming analyses.

Disparities and inequalities have only been exacerbated by the COVID-19 pandemic, the report says. For example, telehealth and other technology has been helpful during the pandemic for some, but it won’t help if individuals don’t have access to smartphones or broadband, the report says.

“Such experiences are a clarion sign of the differences that exist between and among us, illustrating how even exciting innovations always have the potential to leave communities behind,” according to the report.

The root causes of these problems also need to be addressed, the lawmakers say. For example, the report says hospital closures are not the result of Medicare pay rates alone, but also population size in a rural area, a lack of population health coverage, absence of public transportation, decisions not to expand Medicaid, and other factors. Telehealth doesn’t deal with the problems of bringing providers into an underserved community, even if it could help with some access, the report says.

“Without considering these other drivers, such a policy is merely a band aid on a gaping wound,” the report says.

The committee received “few concrete, data-driven fixes” from stakeholders, and “even those appeared limited by questions of their scalability,” the report says.

“Perhaps this gap in data across submissions is a reflection of the truth that ‘silver bullet’ policies do not exist when attempting to address phenomena that are varied, intertwined, and have historic roots dating back hundreds of years. The plight of rural and urban underserved communities is complex and implicates many principles seen to reflect the nation’s conscience. In these circumstances, where structural changes inform social advancements, it is extremely difficult to develop one-size-fits-all solutions to satisfy every stakeholder,” according to the report.

The report adds that community-tailored solutions have been, and may continue to be, the most promising to tackle these issues.

However, the lawmakers say Ways & Means is still committed to working on the larger, overarching issues contributing to the health disparities in rural and underserved areas.

“Renewed leadership from the federal government is critically needed to efficiently and effectively address the role that racism and other social and structural determinants have in perpetuating health inequity as seen through disparities,” the report says. “The complexities involved demand accountability, transparency, and solutions that transcend ‘health’ and ‘health care’ as America’s programs have traditionally defined it. The Ways and Means Committee, guided by the Task Force’s findings, is working to answer that call.” 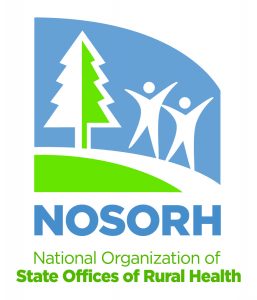 With support from the Federal Office of Rural Health Policy, NOSORH developed this issue brief for SORH and other rural health stakeholders as a means of ensuring unified definitions and approaches to population health and health equity by rural stakeholders.

Check out the Resources by Topic and Position Statements sections of the NOSORH website.

Access to maternity care in rural US counties has been on the decline in recent years. The purpose of this infographic is to show the loss of hospital-based obstetric services from 2004-2018, and how this differs by county type (micropolitan vs. noncore). Read more here.

The Milbank Foundation examines the strategy that state officials took to bring Alabama’s rate for infant mortality drop to 7.0 deaths per 1000 live births in 2018. Part of the strategy incorporated a Collaborative Innovation Improvement Network supported by the Maternal and Child Health Bureau at the Health Resources and Services Administration. Read more here.

The Patient-Centered Outcomes Research Institute (PCORI) is a non-profit organization that funds projects that inpatients and other healthcare stakeholders throughout the research process.  Patients, doctors, and hospital staff from rural Montana helped design this study comparing standard hospital transition support with a new program.  Read more here.  Watch a brief video from PCORI on the importance of including rural populations in research.

A new commentary in NRHA’s Journal of Rural Health examines the relationship between substance use and coronavirus in the Southern Mountains region of Appalachia. Authors cite recent data showing greater and faster-increasing COVID-19 rates in Appalachia and the South and rural-specific challenges to programs for overdose prevention and infection control.

Geographic Variation in the Structure of Kentucky’s Population Health Systems: An Urban, Rural, and Appalachian Comparison

Consumption of Added Sugars by Rural Residents of Southwest Virginia

Listening to Voices in Appalachia: Gathering Wisdom from the Field About Substance-Abuse Recovery Ecosystems